Effects of Covid-19 on Asylum seekers in the UK

According to a media report an asylum seeker was due to have his face-to-face interview with the Home Office officials which is in important part of the Asylum process – in March 2020 but lockdown was implemented three days before his Asylum Face to Face appointment and everything was put on ice.

Wales Strategic Migration Partnership Figures for last October exposed that there were over 2,600 asylum seekers only in Wales.

Activists believe migrants in search of refuge from torture and civil conflicts should be permitted to work, specifically now as the migrants waiting for their Asylum decision continue to increase.

Over 100 groups are supported by the City of Sanctuary in the UK who work with asylum seekers and refugees within their societies.

The charity mentioned that there had been interruptions in the system for decades but the Covid-19 pandemic had generated further backlog due to face-to-face interviews discontinued for safety.

Asylum applications waiting for a decision 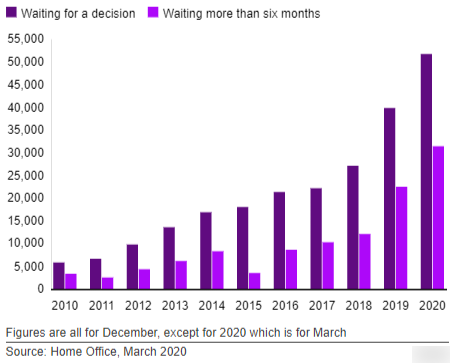 How long are asylum seekers waiting for a decision?

Numbers up to March 2020 exposed that:

53,709 asylum seekers in the UK were expecting a decision on their Asylum application to be permitted refugee status

Of the 8,719 appeals made until March 2020, 45% were successful, meaning the UK Home Office decision was reversed and they were allowed asylum.

The UK’s rule on letting people to work while they wait for an asylum decision is more preventive than other countries in the world.

Regrettably they are not able to work at the same time as they’re in the asylum process, so what we would be demanding for is improved-quality decision making, in addition to rapid decision making.

Then again, in the meantime migrants should be able to work and be a part of the society.”

This website uses cookies to improve your experience while you navigate through the website. Out of these, the cookies that are categorized as necessary are stored on your browser as they are essential for the working of basic functionalities of the website. We also use third-party cookies that help us analyze and understand how you use this website. These cookies will be stored in your browser only with your consent. You also have the option to opt-out of these cookies. But opting out of some of these cookies may affect your browsing experience.
Necessary Always Enabled
Necessary cookies are absolutely essential for the website to function properly. These cookies ensure basic functionalities and security features of the website, anonymously.
Functional
Functional cookies help to perform certain functionalities like sharing the content of the website on social media platforms, collect feedbacks, and other third-party features.
Performance
Performance cookies are used to understand and analyze the key performance indexes of the website which helps in delivering a better user experience for the visitors.
Analytics
Analytical cookies are used to understand how visitors interact with the website. These cookies help provide information on metrics the number of visitors, bounce rate, traffic source, etc.
Advertisement
Advertisement cookies are used to provide visitors with relevant ads and marketing campaigns. These cookies track visitors across websites and collect information to provide customized ads.
Others
Other uncategorized cookies are those that are being analyzed and have not been classified into a category as yet.
SAVE & ACCEPT